From The Ladle To The Grave: The Shallow Gravy Story

See the Venture Family as you've never seen them before: in a 15-minute documentary-style animated special. Follow the meteoric rise, the equally meteoric fall, and the decidedly un-meteor-like second coming of the most important band Hank Venture, Dermott Fitctel and H.E.L.P.eR. robot have ever been in: Shallow Gravy. If youâ€™re hungry for rock, then open wide, because here comes a ladle of heavy metal fire and metaphoric meat drippings.

NARRATOR
Three dark riders came to save the soul of rock with a ladle of heavy metal fire and metaphoric meat drippings.

DERMOTT
We set the world on fire with our sound!

HANK
Technically it was my kitchen we set on fire. 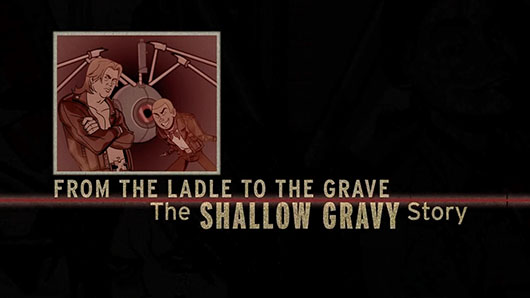 Done documentary style, the narrator explains that the band is the most important since... the Beatles, but they didn't always begin that way. The narrator continues that Hank was first the 'better looking son' of Dr. Venture. Doc explains in an interview that music runs in the family. Remember his musical?

We cut to Brock and Shoreleave in a hotel room wearing suits. Brock is cleaning off a bloody knife and explains that he gave Hank a bass for Christmas one year and he started a band the next day. We cut to Hank who says that Brock gave him lessons and taught him a mnemonic device to remember the strings. Every Adversary Dies Gloriously. The narrator notes that Hank's solo efforts were well received but his 'band' was missing something... 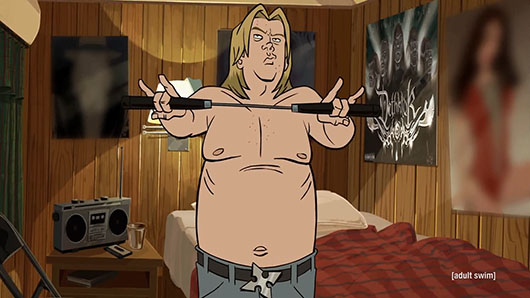 DERMOTT
Wasn't around a lot when I was a kid. Was on the lam. Busted out of juvee after hitting a kid with the Touch of Death.

MARGARET FICTEL
He said what? Oh please. He lived here his whole life with his sister.

The narrator explains that Dermott is a master of various martial arts that may or may not be real and that he was clearly destined for bigger things. We interview Nikki next who notes that Dermott used to sing Spice Girls songs a lot when he was younger.

NARRATOR
Two young travelers on the same road paved with hard rock dreams. Fate drew them together as if one was a magnet that was attracted to trouble and the other was negatively charged trouble.

We then learn the story of how Hank and Dermott met, which of course we already witnessed during the events of "The Buddy System". Dermott's mother explains that she told Dermott to meet her father since he lives right up the road. Dr. Venture seems surprised that Dermott met his father there, but notes that Brock is a bit of a 'gadabout'. He gets around.

BROCK
I was teaching like a baby version of judo to the campers and this fat kid starts up with this crap!

Shore leave shoots someone out the window with a silenced sniper rifle.

DERMOTT
Turned out to be a complete waste of my time because nobody at that dork fest was cool enough to be related to me.

BROCK
You ever want to kick a kid's ass but you can't?!

DERMOTT
Yeah but me and Hank totally hit it off. Dude, did you talk to his wimp-ass brother yet? Fuckin' decked his ass.

DEAN
He is such a liar! I decked him!

We see a 'dramatic' reenactment of Hank and Dermott meeting for the first time and are introduced to the final member of Shallow Gravy, HELPeR. 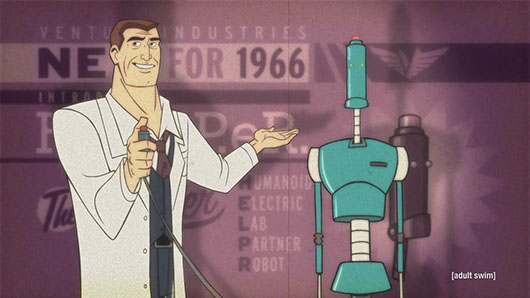 Dr. Venture explains how he used to program HELPeR with songs for parties and everyone could sing along with him. That's right, he invented karaoke.

The narrator notes that, now that the band was complete they started practicing and the local press took notice.

DEAN
Well the Home News back then wasn't the slick weekly it is today. I mean it had all the hard-hitting facts that my readers demand but it was dittoed and stapled on the side.

Shortly after the band put their music on cassette to get it out there. 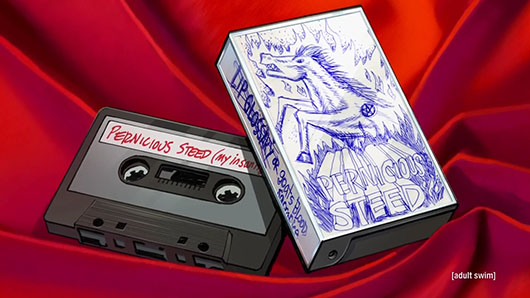 We then interview the mysterious "Viceroy" who has his face and voice obscured, though there's something kind of familiar with him. Hmmm. Either way he notes that the cassette contained one song that sounded like thirty minutes of an exploding car made out of basses. Awesome. Hank notes that their music 'back then' was more raw.

New drummer, a release and press coverage meant things were looking up for the band... until tragedy struck. We are of course talking about the car accident/explosion from the end of "The Family That Slays Together, Stays Together, Part II" where HELPeR (and 24) died. 21, uh I mean, "Viceroy" is not happy about that being brought up, noting that a guy was in the car too. Dr. Venture notes that even though hundreds of lives were lost that day it's still tough when one of them is a family member. Hank talks about how one second HELPeR was here and the next he was everywhere... Brock points at the plate in his chest, remembering his time when HELPeR was wedged in there.

THE MONARCH
Hey here's something for your goofy little slide show. I broke up the band. So, uh, suck on that, America.

And just like that Shallow Gravy was over. Hank apparently spent the entire summer practicing and actually got good at the bass. Dermott was bummed too, though seemingly not as much. Then out of nowhere one day Hank called him up and played a killer riff over his phone... from his watch phone.

DERMOTT
Yeah I wrote those lyrics in one night. Song used to be called "Jack". It was about Jack the Ripper.

HANK
It was all about some old guy that killed people or something. I said: "That'll never sell." You know what sells? Jackets.

It was around this time that Doc rebuilt HELPeR. 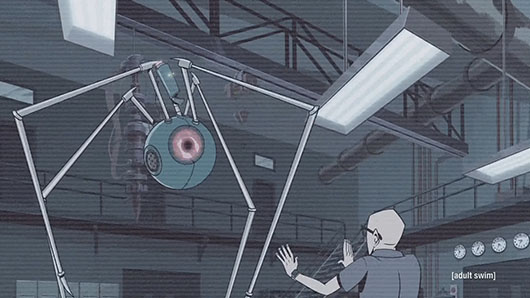 DERMOTT
So HELPeR's back and he's huge and spider-like. Everything's awesome and I go: "Hank, new name. Shallow Grave."

Hank explains that HELPeR thought it was pretentious and unfairly pigeonholed them, so they changed the name to Shallow Gravy. Though Dr. Venture got kind of tired of hearing the song over and over, so he gave them his dad's old van and they went on tour. They called it the gravy boat. Get it?

Their road trip was short lived, however, mainly due to the price gas for a gigantic, ancient van hauling a 900 pound drummer. However all was well when they landed the gig of a lifetime... the prom. The greatest show they ever played.

HANK
Dermott took off his shirt I think, is that what he meant?

More importantly the prom gig brought the band to the attention of 'local amateur DJ and sometimes scientist', Pete White. 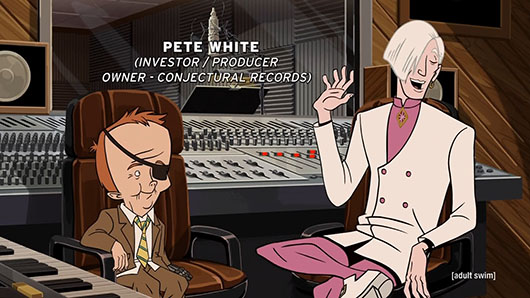 PETE
Magic. They had it all, I mean, a great bass sound, a pissed off frontman.

BILLY
And a robot!

PETE
A real robot! Not like those Kraftwerk phonies. Listen, boy bands are always hot. I wanted to get them into the studio immediately.

BILLY
Yeah, before they were a man band.

Pete spent a lot of time on production, which Hank seemed to enjoy but Dermott thought was over-produced.

NARRATOR
"Jacket" hit the scene like a storm that rained molten lead instead of regular water, and it burned the pe- I just can't say these things.

DERMOTT
You gotta read it! Why you stopping? Go!

NARRATOR
It's just a silly line.

NARRATOR
Did you boys write this?

HANK
Shallow Gravy isn't just a band. It's best friends that made a movement. [snickers] Movement.

DERMOTT
Yeah, I never found my father, but I found my brother. In rock! The world will know the names Hank Venture and Dermott Fictel.

NARRATOR
That's the end of our story, but not the end of Shallow Gravy. This is just the beginning.

Content © 2004 - 2023 and logos and names are ™ The Mantis-Eye Experiment. Not affiliated with AstroBase Go!, Adult Swim, Cartoon Network, Turner Broadcasting or related entities. Views expressed in community-generated content do not necessarily represent those of this site. Terms of use.