This Is The Last Time

by Mike
Jun. 8, 2010, 3:56am | 8 Comments
Entertainment Earth looks to have the final versions of the Venture Bros. Mego-style figures up. The head sculpts all look to have changed at least slightly, with Brock undergoing the biggest revamp. They all look much less prototype and more finalized, which should make a lot of people happy. Click the heads for the full-sized versions:

Thanks to agentraybans on Twitter for letting me know about these!

by Mike
Jun. 5, 2010, 6:00pm | 0 Comments
For those of you of the European persuasion (specifically those in the UK), it's worth noting that Turner has struck a deal with FX UK to bring adult swim to that network. This includes The Venture Bros. of course, so now watching it will be easy! Thanks to Mark Wilkinson for sending me that news.

Dude, That Is Mint In Box!

by Mike
Jun. 5, 2010, 5:50pm | 2 Comments
Here's the remaining cards for the set of Venture Bros. figures (though the art doesn't differ too much between each 'team' you could assemble your own HELPeR if you so desire.

by Mike
Jun. 4, 2010, 2:30pm | 2 Comments
So far it looks like only Mego Museum has posted their cards which include those for Henchmen 21 & 24. You can also hit up their blog for art from BBP's upcoming Flash Gordon and Twilight Zone figures.

Update: Idle Hands has the remaining cards up on their site (as well as some from other sites) so you can take a gander and Brock and Dean's cardbacks now and also complete your papercraft HELPeR if that's your thing.

by Mike
Jun. 4, 2010, 9:00am | 4 Comments
As promised the awesome folks at Bif Bang Pow! have provided this site with some sweet-sclusives pertaining to the soon-to-be-released Venture Bros. action figures. What we have here are the card backs (and fronts) for Dr. Venture and The Monarch which were designed by Doc and Jackson themselves! Other sites will be revealing more card art so keep poking around for them!

Clickity-clack for the full-sized versions. 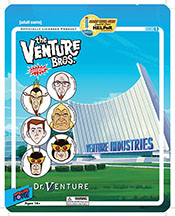 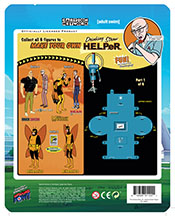 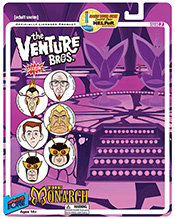 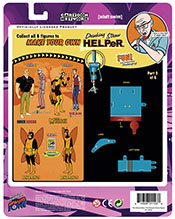 
Many thanks to Jason Lenzi and the fine folks at Bif Bang Pow! for providing these!

by Mike
Jun. 1, 2010, 11:40pm | 5 Comments
If you're into the music of JG Thirlwell/Foetus/Steroid Maximus (and why wouldn't you be?) and will happen to be a reasonable distance from Prospect Park in Brooklyn, NY on June 18th, you may want to head over there for a performance by Steroid Maximus which is Thirlwell's "rarely heard Steroid Maximus large ensemble, a big band/exotica mini-orchestra". And as if that wasn't enough, foetus.org has even more good news:

JG Thirlwell will be performing his Steroid Maximus project as a twenty piece band with brass section and strings at Prospect Park for the Celebrate Brooklyn Festival on June 18. Steroid Maximus will be performing the Ectopia album and selections from the score of The Venture Bros. Rain or shine, and itâ€™s free - mark your calendars for this once-in-a-lifetime show!

Many thanks to mondocurry for mentioning this in the comments!

by Mike
Apr. 28, 2010, 8:35pm | 37 Comments
If you recall back when Venture Bros. toys were first announced, along with the lovingly-debated Mego-style figures, promises of bobbleheads were also made. However bobbleheads were nowhere to be seen! But no more, my friends! Behold: 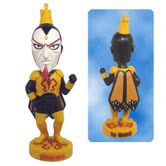 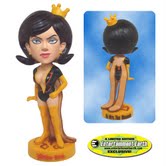 My super-secret sources tell me these will stand around seven inches tall and are 'brimming with attitude' which sounds like it's going to be a lot of trouble but they're just toys so I think you can manage it. Just make sure you feed them. Dr. Mrs. The Monarch is also exclusive to Entertainment Earth.

As you might expect, you can pre-order these with the following handy EE links: the Monarch and Dr. Mrs. The Monarch and both will set you back an affordable $12.99 each. Enjoy!

An Evening With Jackson Publick at MoCCA

by Mike
Apr. 7, 2010, 1:31am | 22 Comments
If you're in the New York City area around April 22nd consider heading over to The Museum of Comic & Cartoon Art for an event featuring Jackson Publick. It's at 7pm and admission is $5 (or free if you're a member). Aside from scenes from the show you'll get to hear Jackson's thoughts on the evolution of The Venture Bros. over the years as well as an audience Q&A at the end. Thanks to The Venture Bros. Blog for the news.

Egg On Your Face: The Yolk's On You

by Mike
Apr. 4, 2010, 7:16am | 11 Comments
I like to think all the work I've put into this place over the years has made it fairly successful. It's been a pretty great learning experience for me in a number of ways.

Well, if you came here April 1st, 2010, you witnessed something that I would probably consider a colossal failure. Instead of my usual run-of-the-mill April Fools' joke I went with something slightly more ambitious.

Instead some people saw it and nobody really got very far, and zero people completed it. This is mainly because I failed to communicate exactly what was going on, or provide any real context for the game. In memory of this wondrous event, and as a way of adding more content to the ol' Five Years o' Mantis Eyes, I wrote a postmortem of the whole ordeal. Some of it may be boring (there are charts), but if you don't really care much about that, there's also juicy blasts from the past in the form of my less ambitious but better executed April Fools' jokes. It's like a history lesson! Enjoy!