Impressions From The Venture Bros. Panel

by Mike
Jul. 24, 2010, 11:57pm | 7 Comments
Today's Venture Bros. panel featuring Jackson, Doc, James Urbaniak and Patrick Warburton apparently went well, and various web sites will provide info about it to you, the reader! Cool, right? These will be updated as a find them:

by Mike
Jul. 24, 2010, 9:43pm | 4 Comments
UGO has some impressions of yesterday's Adult Swim panel which included Doc & Jackson (along with teams from other shows). There was some Venture Bros. news that we already knew (season start, DVD release) but also some interesting tidbits such as:

Doc Hammer feels the upcoming episodes to be "better," with less Sgt. Hatred, but more Brock Samson and Shore Leave, and possibly even a few musical numbers. "Buckle up for a bumpy season."

by Mike
Jul. 22, 2010, 12:45pm | 15 Comments
ActionFigurePics.com has a look at the BBP Venture Bros. figures which includes not only the figures that we've seen but shots of wave two figures: Classic Dr. Girlfriend, Dr. Orpheus, Hank (yes, Hank) and Phantom Limb complete with hilarious clear arms and legs. These ones look less prototype-y than the original set we saw way back when.

In celebration of San Diego Comic-Con and its many Venture Bros-related treasures we have a special giveaway for all who were unable to attend (which is 87% of visitors according to the latest poll)! For each day of Comic-Con one lucky winner will win a copy of Michael Borkowski's sketch book complete with a hand-drawn Venture Bros. sketch in the back! The giveaway is simple; just enter your name and email address and make sure you aren't attending Comic-Con and that's it! One sketchbook will be given away for each day of Comic-Con, so you have four chances to win!

Check out the Mantis-Eye Comic-Con 2010 Giveaway page to enter!

by Mike
Jul. 20, 2010, 12:50pm | 5 Comments
For those of you attending Comic-Con 2010 in San Diego this year I've put together a schedule of all the Venture-related happenings. This includes all the panels and signings as well as any unofficial meetups I could find (so far only one). Be sure to let me know if there's anything else that should be added, and have fun to all attending!

Jackson Talks About Venture Bros. Season 4.2 And The DVD

by Mike
Jul. 19, 2010, 11:28am | 11 Comments
With a decent amount of confusion surrounding the announcement of Venture Bros. season 4.2's start date as well as the 4.1 DVD, I decided to go straight to the source to get some clarification on the whole thing. Super thanks to Jackson for taking some time to set the record straight and provide some useful info.
Read More » 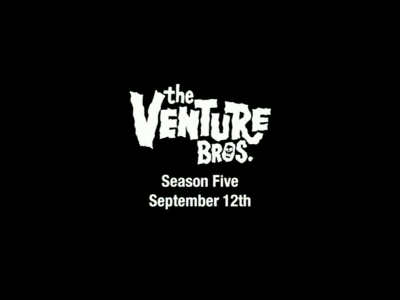 Here's a video of the entire thing which includes start dates for a couple other shows.

Fresh on the heels of the premiere episodes of season 4.2, the first eight episodes of Venture Bros. season 4 (dubbed 'Volume 1' on the packaging) will show up on DVD on October 6th. No news on what the set will include, though it is apparently a two disc set, so expect commentaries from Jackson, Doc and friends at the very least. Note that, as Jackson mentioned in his blog there won't be a Blu-Ray release until the complete season four can be put on it. So if you're buying on Blu-Ray you won't have anything to worry about until at least next spring, but DVD folks will have two sets to buy.

The set has a suggested price of $23.98, so you may be able to snag it for $20 some places. Many thanks to Robert Sullivan for sending me this news; he is apparently better at finding this stuff than I am!

New Episodes September 12th For Sure?

by Mike
Jul. 12, 2010, 8:23pm | 16 Comments
Venture Bros. Blog is reporting that Adult Swim recently aired a bump confirming the previously speculated September 12th start date. Among other things the season was named not as 4.2 (or 4.5) but as season 5. I haven't seen the bump yet myself, but everything seems to be pointing towards 9/12 so I guess it's (finally) time to mark your calendars.

by Mike
Jul. 9, 2010, 2:13pm | 13 Comments
Oh man I totally tricked you guys! Okay not really, the schedule just isn't on the Comic-Con site yet (likely tomorrow). Jackson just let me know that there will in fact be a dedicated Venture Bros. panel the day after the Adult Swim one (so, Saturday the 24th):

Just saw your newest update. In fact, we ARE doing a dedicated Venture Bros. panel at SDCC this year. And it looks like Patrick Warburton and James Urbaniak will be joining us. That's right, Doc and Brock together again for the first time. It all apparently goes down at: 12:00-1:00 Indigo Ballroom at the Bayfront Hilton (across from the convention center)

That will be an awesome one to see. I'm totally jealous of everyone going!

Update: IGN has a more complete schedule for those interested. Thanks Robert!