Week two is over and done with, and there were some pretty strong entries. It's actually surprisingly difficult to pick a winner because a lot of them have been pretty cool. For example someone made a SPHINX shirt that is arguably better than the one for sale in Adult Swim's shop. Either way the winning shirt is pictured above. I give the winner, wickednikki, credit for making a shirt that embodies 'Science!' and for being the only entry to feature the Billy Quizboy logo. Buy it at Nonsek if you desire.

Fear not to you non-winners (you're all winners to me, by the way) because there are still four more chances to win. So make with the remixing and get with the contest entering and let's settle this next week, same time, same channel. Go!

All The Comic-Con Coverage That's Fit To Print

by Mike
Jun. 22, 2011, 11:45pm | 4 Comments
Bucking the usual trend for me, this year I will be attending San Diego Comic-Con from July 22nd until the 24th. So what does that mean for you, the loyal reader who is stuck in a place that isn't San Diego? Well, it means lots of first-hand coverage of whatever Venture Bros. news comes out of the convention (which will include the debut of the Shallow Gravy special) as well as tons of what I'm sure will be crazy photos. For those of you who will also be attending, if you can find me you can say hello and I might even have surprises for those of you who do (maybe). More info to come as a work out the details!

The first week of festivities is over but the weekly giveaways continue. Hit up the contest page to find out how to remix your own Venture Bros. shirts and enter to try and win it for free. Those of you who are already pros at this might just want to head straight for the remix machine. Get to it!

For those curious the above shirt is what I selected as the winner. It was pretty difficult though because there were lots of really great submissions. Congrats to Calvin for remixing it. If you're interested you can buy it at Nonsek.

by Mike
Jun. 14, 2011, 1:16am | 0 Comments
Continuing the Venture Bros. artists series (or whatever you want to call it) is this drawing of Pete White as Thanatos (as seen in "Assisted Suicide") by Chandra Free, long-time fan of the show, friend of the site and author of The God Machine (and all-around awesome lady). 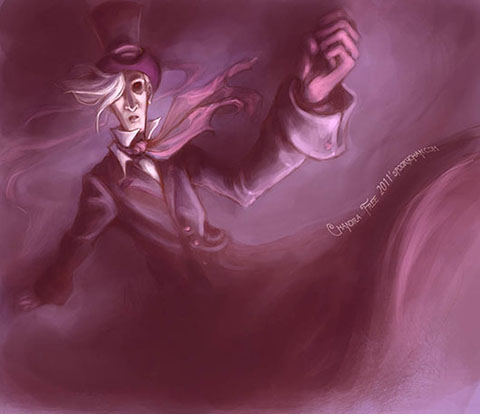 Click for a larger version and you can always check out more on her Tumblr.

Howdy, friends! Today I'm happy to announce the beginning of the Nonsek remix shirt giveaway. The guys at Nonsek were nice enough to collaborate on a little weekly giveaway where basically you guys use their Venture Bros. remix machine to make cool shirts. Then you can submit them to this contest via Twitter or on the contest page (see that for more info) and every week I'll pick my favorite and the winner gets a code for a free shirt on Nonsek. Head over to the contest page for all the info you'll need. Have fun!

Dinoflagellate Blooms By Manorexia Is Out

One of the many hats Venture Bros. score composer, JG Thirlwell wears is that of Manorexia, which has just released a new album called "Dinoflagellate Blooms". You can check out samples on the page and purchase it for $15 which includes both a CD version and a DVD version for those of you who want to experience it in 5.1 surround. Also if you live in the vicinity of New York City there are some events you can attend:

We are also thrilled to announce that the album will be presented in all its surround-sound glory at a special, free listening event at Harvestworks, New York on June 22 2011 as part of the New York Electronic Arts Festival. The album will be played in its entirety at 7.15pm and 8.30 pm. The album will also be available for purchase at the event.

Manorexia will also be performing on October 2nd 2011 with Portishead at an All Tomorrows Parties event in Asbury Park, NJ.

by Mike
Jun. 10, 2011, 3:34am | 2 Comments
Comics artist Todd Nauck, who may currently be known best as the guy who drew the Obama/Spider-Man team-up book (Amazing Spider-Man #583) posted a sketch of Dr. Girlfriend on his Tumblr. I've been covering some different artist renditions of Venture Bros. characters so this seemed like a natural fit: 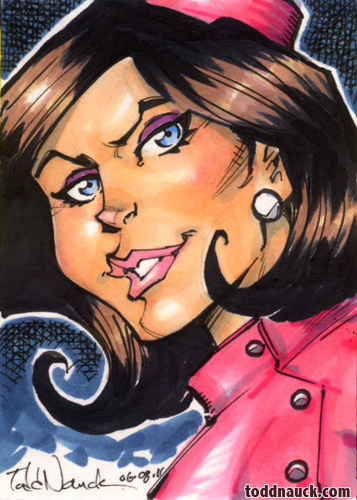 There's more stuff on his site and Tumblr (which seems to be pretty new) if you're interested.

by Mike
Jun. 9, 2011, 5:40pm | 1 Comment
For those of you super-fans with no fear attending either San Diego Comic-Con (July 21 - 24) or Dragon*Con (September 2 - 5) this year Cadette Vanessa, better known to some as DalekEmpress is attempting to organize a gift of sorts for Jackson and Doc, who will be doing Venture Bros. panels at both of those conventions:

Goal: Pre-panel Pep Rally at ComicCon & DragonCon. Show that Go Team Venture spirit with Venture themed cheers and pump up the crowd while people are taking their seats.

I know there are others out there who may have wanted to be cheerleaders but lacked athletic ability and any enthusiasm for sports (or just want to yell while wearing a cute outfit), and in Venture Bros. found something we're honestly excited about, and enough so to jump up and down and proclaim it (in rhyme even) in front of thousands of other fans.

So if you're interested in participating or want to help out in some other way you should fill out this handy form she's put together or you can let it be known in the comments here if that's your thing.

by Mike
May. 26, 2011, 4:00pm | 6 Comments
Yes, the rumors are true! Venture Bros. is one of the lucky twenty-five animated TV series to be on Entertainment Weekly.com's list. Sharing the spotlight with the likes of The Simpsons, Futurama and The Flintstones (among many more) Venture Bros. got the nod for "great action set pieces, brilliantly conceived characters ... and the ability to somehow make you feel emotionally invested in the relationship between a man dressed in a butterfly outfit and his gravel-voiced girlfriend."

EW is also accepting votes from users so head on over there and give your favorite (which I can only assume is Venture Bros.) a vote!

by Mike
May. 25, 2011, 1:22am | 0 Comments
For those of you attending Dragon*Con this year, James Urbaniak has been added to the guest list. While we don't know the capacity of his visit just yet, or if this means he'll be on the Venture Bros. panel, it's certainly good news either way. Jackson & Doc are not on the guest list just yet, though Jackson noted that they will likely be there since it's Adult Swim's tenth anniversary.