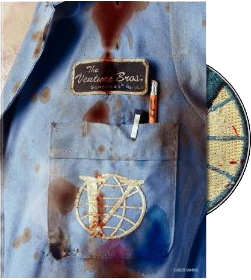 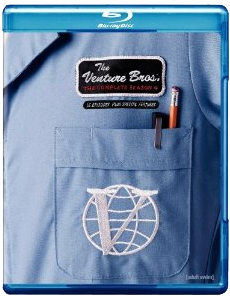 by Mike
Mar. 1, 2011, 12:19pm | 2 Comments
Missed out on the last bunch? Well you're in luck, because Venture Bros. storyboarder Douglas Lovelace has put up some more VB-related art for your eye holes and money pockets. As with the last batch these are all from season one and will be up for bid on eBay for the next 9+ days (as of this writing). Many thanks to @malpertuis for twittering about this.

by Mike
Feb. 25, 2011, 2:09am | 0 Comments
Some of you may recall shows from the previous years, but for those who may not remember Too Art For TV is an art show with contributions from many animation industry veterans. The show is in New York City which of course means it always contains many contributors who also work on The Venture Bros. Among them the creator and curator of Too Art For TV, Liz Artinian who happens to be the Color Supervisor for Venture Bros. So if you're going to be in the New York area (specifically Williamsburg in Brooklyn) at some point between March 25th and April 23rd you should totally give it a look. Thanks to Kate for letting me know about this!

For those of you with iPhones/iPads/iPods Touches you should know that you can grab the official Adult Swim app from iTunes. The app is basically a mobile version of their site, so it contains all the episodes, clips and info along with other handy stuff like game downloads and more.

Action Figure Insider is hanging around at Toy Fair and taking a ton of pictures of everything, which includes the BifBangPow! stuff I mentioned in the previous update from this morning. Above and below you can see some more clear shots of some of the new figures. Apparently the Jonas Sr./Young Rusty set will be a SDCC exclusive, so con attendees have that to look forward to (though it's they're anything like last year's 24/21 exclusive set you'll still be able to buy them yourself). Click the pictures to see much larger, uncropped versions.

by Mike
Feb. 13, 2011, 10:07am | 6 Comments
Our friends over at BifBangPow! put up the promised sneak peek at what's to be shown at the upcoming Toy Fair 2011 in NYC (which starts today and runs until the 16th) and the Venture Bros. related results may surprise you! (Click for a bigger version.)

Along with expected figures like Billy and Molotov there's a Dr. Henry Killinger (with Magic Murder Bag proudly on display), Brock decked out in SPHINX gear (SPHINX!) and even Dr. Jonas Venture Sr. and young Rusty Venture. No word on how final these are or if there are any more to be revealed (Billy without Pete?!) but if you're around the Javits Center in Manhattan this week you can check them out at Toy Fair in booth 4813.

Update: Observant reader Pyroth also pointed out that you can read the cards (with minor difficulties) which list out Shore Leave, Jefferson Twilight, Pete White, The Alchemist and Dr. Mrs. The Monarch. So, expect to see those some time in the future, even if they aren't pictured here!

I bet you'd like to know. That's a regular feature at Ameoba Music, which is a record shop with three locations in California: Hollywood, San Francisco and Berkeley. Thirlwell was recently at the SF store and participated in their "What's In My Bag?" feature which you can see here or watch the embedded video right here.

by Mike
Feb. 8, 2011, 2:06pm | 5 Comments
Not to be confused with Russian T-Shirt Roulette of course. Nonsek, makers and sellers of random t-shirts (called remixes) has recently partnered with Adult Swim such that you can purchase Adult Swim Remix shirts. Remixes include various Adult Swim TV shows including The Venture Bros., hence my reason for updating about it.

If you missed out on shirt club or don't like any of the shirts Adult Swim offers on their shop this might be your chance! You can end up with some bizarre logo combinations, or even just bizarre logos in general. One of them is the skull in Sgt. Hatred's logo with 'The Monarch' written on the helmet, which I'm not sure I understand. Shirts will run you $23 each.

by Mike
Feb. 4, 2011, 2:53pm | 13 Comments
We're back with a fresh new Let's Watch. It's extreme and in your face! Okay, actually it's not. However it is here in anticipation of the classic season one episode, "Tag Sale, You're It!" which many believe to one of the highlights of the series! It's also a genuinely excellent starter episode if you are looking to get some friends into Venture Bros. The episode airs Saturday at 11:30pm eastern and pacific time (other timezones adjust accordingly) though it will sadly not re-air later in the night/morning. Talk about it here in the comments and relive the awesome glorious days of yesteryear!

Bid On Some Season One Storyboard Art

by Mike
Feb. 4, 2011, 2:38am | 1 Comment
Douglas Lovelace, who has been storyboarding for The Venture Bros. since the pilot (and has contributed to every season since) just informed me that he has put a bunch of season one storyboards up on eBay (Jackson-approved of course). There are some pretty classic scenes in there, and Mr. Lovelace always produces excellent quality stuff:

So if you're in the market for a piece of Venture Bros. history then this might be for you! Enjoy!