by Mike
Apr. 3, 2012, 1:47pm | 0 Comments
If you're a fan of Venture Bros. then you're inevitably fan of Douglas Lovelace, who has worked on the show as a storyboard artist and character designer in varying degrees since the pilot episode. Sadly he won't be involved with the upcoming season 5, but that didn't stop him from recounting his glory days on the past few seasons. Check out my interview with Mr. Lovelace for info on what he did on the show, his favorite Venture Bros. stuff, what he's working on now and words about working in animation. Here's a snip:

The eBay auctions came about by accident. I kept the artwork because it represented a breakthrough for me as an artist, and because no one else on the production team wanted it. It migrated to milk crates in storage where it would have rotted away had I not noticed that fellow Venture vet Stephen DeStefano sold some of his paper Venture Bros. art on eBay. So I thought I'd have a go. Got Jackson's okay. The Venture fans are so happy to get this artwork that I feel the obligation to keep going until it's all gone.

Read on for more!

by Mike
Apr. 2, 2012, 5:35pm | 1 Comment
According to an update on the BifBangPow! website they will now begin production of only the Brock Samson figure. Sadly the pre-order hurdles could not be overcome for any other figures (cancellation notices for those of you who pre-ordered any of them are going out soon), but at the very least you can add Brock to your collection. There is a small amount of hope left though:

The fate of the remaining characters depends on strong pre-orders. We will make announcements when each new character is about to go into production, whenever that may be. So in theory you may see more delays on certain characters, but eventually we hope to release them.

As with all of BigBangPow!'s toys, you can pre-order Brock on Entertainment Earth for $9.99. The figures will ship after San Diego Comic-Con this year, in either late July or early August. You can see some photos of Brock in BBP's update as well.

Ghost Mantis: Not Actually A Ghost

Okay, that's enough of that. Obviously Mantis Eye: The Original Mantis Supply Store was this year's April Fools' gag. Hopefully it was one of the less lame ones you witnessed today, on a day when the internet is traditionally completely untrustworthy. I assure you there are no legal battles going on for the name of this site.

In case you didn't know (and I doubt you do), the joke site was also based on Mantis Place, which is a real (though non-crazy) seller of real, live mantises. They also probably have more trustworthy information, mostly because I didn't make that site up. You can still check out the gag site if you like, though the Mantis Buyer achievement is no longer gettable. Thanks for visiting!

by Mike
Mar. 27, 2012, 1:22pm | 4 Comments
As part of the initiative for more Venture Bros. interviews and articles (as dictated by you guys) the lowest-hanging fruit was of course my NYCC interview with series co-creators Jackson Publick and Doc Hammer, which currently only exists in podcast and video form. Fear not for those of you who prefer to read something, for the third time is indeed the charm! You can now read the full Ask Jackson & Doc interview with questions posed by many of you fine folks. For those of you who have already listened to the podcast version, I thank you, but sadly there's no new content here. Rest assured that this is the last time you'll have to see this interview though!

by Mike
Mar. 15, 2012, 3:53am | 1 Comment
Slightly late with this news, but if you're into SuperJail! at all, it's worth noting that season two came out on DVD on March 13th. You can pick it on Amazon or other fine DVD retailers.

by Mike
Mar. 1, 2012, 2:04am | 0 Comments
Venture Bros. storyboarder Douglas Lovelace has put up his latest batch of season one storyboard art for your browsing and bidding pleasure. Among the offerings this time are angry Hank from "Careers In Science", Hank and Dean as fantasy treasure hunters from "The Trial of the Monarch" and Monarch on the phone from "Home Insecurity" as well as many others. Check out all the listings on Douglas' eBay page.

So NY Toy Fair is currently ongoing and, as she has done before, Chandra Free snapped a photo of some new Venture Bros. toys from BigBangPow!'s Mego-style line. These are extremely early prototypes of Pete White and Jefferson Twilight. No word on when these will be out just yet, though by the looks of the prototypes they are still a long way off. You can also click on the image above for the full version.

Gillian Jacobs of Community 'Did A Voice' For Venture Bros.

by Mike
Feb. 6, 2012, 4:53pm | 8 Comments
Since we're in the off-season any news is good news (for the most part), so you Community fans may be pleased to know that Gillian Jacobs, who plays Britta Perry on the show announced via her IAMA on Reddit that she recently recorded a voice for Venture Bros. Of course we don't know anything else really, but there will be a new female character on the show for at least one episode, probably.

Slight Status Update On The 3 3/4" Figures 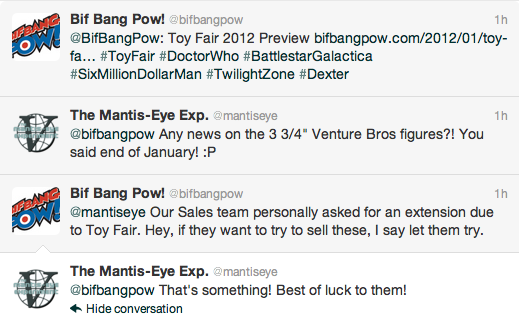 I asked @BifBangPow what the deal with the Venture Bros. 3 3/4" figures is, since they mentioned they might have news at the end of January. Slightly encouraging result since it means the figures aren't quite dead yet, but unless they can get a bunch of buyers I don't know how likely it is these will happen. You can also check out their Toy Fair 2012 preview which doesn't include any Venture Bros. items, though they do offer words of encouragement on that front.

by Mike
Jan. 29, 2012, 4:39pm | 0 Comments
I guess this Facebook thing is what all the cool kids are using these days. I was once content to stick with just Twitter and Tumblr but I see now that we need at least three social media networks to be truly awesome. So what does this mean for you, the loyal reader? Well, mostly nothing aside from that you can get Venture Bros. news on your Facebook thingy. All the cool stuff will still be happening here at the main website of course. Anyway you should head on over there and 'like' the site or something like that. I need at least 100 likes so I don't feel inadequate! That's how you truly measure success, you know.