by Mike
Mar. 12, 2013, 1:05am | 13 Comments
For those of you who attended or watched the various shakycams of the Venture Bros. panel during the previous New York Comic Con you may remember a certain sizzle reel. A nice, steady version of that was never released... until now! In anticipation of season five being around two months away Adult Swim released it as a teaser. There's also a YouTube version if that's your thing. Beyond the video quality there's no difference between this and the NYCC one, but it's nice to get a little refresher for what Jackson and Doc have in store for us.

First Round of BifBangPow 3 3/4" Figures In Stock

by Mike
Mar. 12, 2013, 12:48am | 9 Comments
For those of you waiting on the release of the first non-Brock batch of the Venture Bros. 3 3/4" figures from BifBangPow! you'll be pleased to know that they are finally here! Dr. Mrs. The Monarch, Dean and Hank are all available for purchase and immediate delivery instead of just pre-order. They can be yours for a paltry $9.99 each (plus shipping and all that). Future figures in the line after this include Dr. Venture, Phantom Limb and The Monarch. No word on a Venture Compound playset just yet.

by Mike
Feb. 28, 2013, 11:28am | 5 Comments
Those of you who frequent the site you may have noticed my affinity for Team Fortress 2, particularly when Adult Swim meets TF2. Well, with the advent of those TF2 items along with Source Filmmaker (which allows fans to make high quality movies using TF2 assets) it was only a matter of time before somebody did something awesome. I present to you the famous scene from "Hate Floats", lovingly crafted by JackMuu:

A Look Back At "The Terrible Secret of Turtle Bay"

by Mike
Feb. 16, 2013, 3:10pm | 6 Comments
As I previously mentioned, the pilot episode "The Terrible Secret of Turtle Bay", first aired ten years ago yesterday. In celebration of this ten year milestone for the series I've written an article looking back on the pilot and how it differs from the series, how it set up some things and what it allows us to speculate about the show based on all the episodes we have now. If you have the season one DVD I also recommend popping it in and watching the episode before (or after) you read the article, as it's good to have it fresh in your mind. There's some pretty interesting stuff in there, and the commentary track also provides a good amount of insight.

by Mike
Feb. 15, 2013, 5:45pm | 8 Comments
For those of you who have been with Venture Bros. since the ultra-beginning you may remember the pilot episode, "The Terrible Secret of Turtle Bay" airing way back on a chilly (I assume) February night back in 2003. Of course that night was February 15th, which makes the pilot episode (and by extension, the series) ten years old today. After season one was greenlit there was still over a year before the first canonical episode aired (sound familiar?) but the pilot is of course where it all began. Ten years is a pretty damned long time, and even though the wait between new seasons can sometimes boarder on excruciating it's important to be thankful for something that has had so much staying power. From Adult Swim for nurturing it to Jackson and Doc and the rest of the crew for toiling over it for a large portion of their lives, to you for watching it, buying DVDs and (hopefully) telling your friends. Venture Bros. couldn't have lasted this long without everything going so very right, and that's been a pretty cool thing to see these last ten years.

by Mike
Feb. 12, 2013, 1:35pm | 3 Comments
Astute reader 'The Tick' has kindly pointed out this large gallery of BifBangPow! items currently on display at NY Toy Fair 2013. This includes many of the smaller action figures such as The Monarch, Phantom Limb, Hank, Dean and so on, as well as the Mego-styled figures such as Jefferson Twilight, Sgt. Hatred (!!!), Pete White and more. Extra special is a brand new HELPeR figure (classic form, not walking eye) and some Brock-themed drinkware including a pint glass and color changing mug. Check out the full gallery from Figures.com or a smaller one taken by Action Figure Insider.

The Journal of Venture Studies

by Mike
Feb. 11, 2013, 2:14pm | 4 Comments
A while back I posted a poll asking what sorts of things you guys would like to see from the site during the (long) offseason and the clear winner was articles about the show. Of course I failed to deliver on this (though I did make an attempt or two) so for those of you waiting for all kinds of awesome Venture Bros. analysis, I point you towards The Journal of Venture Studies:

Volume I of JoVS -- now available online -- examines a diverse range of topics, including an exegesis on the theme of "failure" in the series, and the flavor of the Red Mocho Kooler.

Also for those of you itching to write some sort of Venture-related essay or whatever else, they are currently accepting submissions for the next volume, which is due out in April (proposals are due by March 14th):

The Journal of Venture Studies currently has an open call for submissions to Volume II of JoVS -- to be released in April 2013 in collaboration with the good people of Adult Swim.

Many thanks to Katie for pointing this out to me.

by Mike
Feb. 7, 2013, 12:57am | 8 Comments
Since this has now been confirmed by multiple sources, it would seem safe to make a non-rumored update! Season 5 of Venture Bros. starts on Sunday, May 19th! This is, of course, subject to change, but it's in line with everything we've heard from production so far, so I think it's safe to start scheduling premiere parties and such. Rejoice! 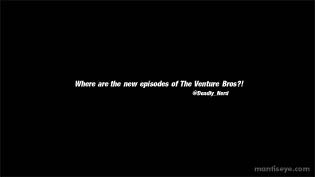 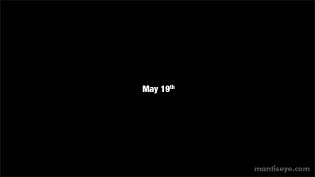 You can also watch the bump below thanks to Bump Worthy.
Read More »

by Mike
Feb. 7, 2013, 12:04am | 2 Comments
If the recently released Venture Bros. retro travel mug wasn't enough to whet your appetite and you also happen to be a fan of pink items then BifBangPow! is probably your favorite company right now. Just added to the site are two Dr. Girlfriend themed items which can hold a beverage of your choice: Both of these are coming in May 2013 but you can pre-order them right now if you want.

by Mike
Feb. 5, 2013, 4:04pm | 4 Comments
I haven't found an online version of it on Bump Worthy yet, so I can't confirm it, but I'm hearing that Adult Swim aired a bump last night stating that season five of Venture Bros. would begin on May 19th which is inline with what Jackson said in December. If anyone has a video or screengrab or even independent confirmation of the bump, please post here in the comments or let me know directly.