Has Comic-Con ever so perfectly coincided with a season finale of Venture Bros. before? It's like the Venture Bros. version of the Transit of Venus. While those attending Comic-Con have ample opportunity to see Jackson and Doc on the Venture Bros. panel and even briefly talk with them and get their autographs, those of us stuck at home are not so lucky.

While I can't get you an all expenses paid backstage pass to Comic-Con on short notice (or probably at all) I can help you out with the autograph thing. Jackson and Doc have been kind enough to agree to sign some of these prizes, and instead of selling them for a huge profit on eBay I'm passing the magic on to you! Here are the prizes. They're not signed yet, so you'll have to use your imagination. 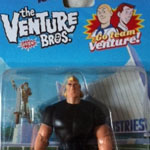 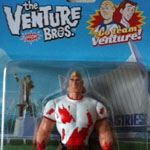 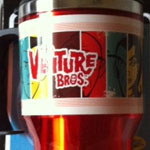 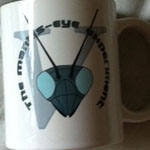 So what do you have to do to win? Well, nothing, really. There's only one rule:

You have to swear that you're not attending Comic-Con.

Remember, this contest is for people who can't get out there! I'm also making entering to win the Mantis-Eye mug optional. Yes, it's super cool and (probably) signed by Jackson and Doc but I only want to give that out to a super fan who really loves The Mantis-Eye Experiment. If you're only here for the sweet prizes then you probably don't want that. I totally understand.

As is the usual case for giveaways here, if you have a Mantis-Eye account then your chances of winning are magically doubled. You don't need one to enter, but if you don't have one and want to increase you chances, you should totally get one!

Sorry, this giveaway has ended!