Season 3 Coming to DVD and Blu-Ray! 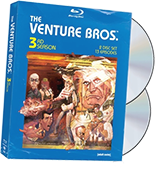 In spite of all the skepticism revolving around season three's probability of being released on Blu-Ray (even though it was produced in HD) it appears that it will in fact get an HD release along with the standard fare DVD set. IGN has a story along with two product-shot mockups showing off the old Atari game box style the sets will carry.

Arriving at retail as a two-disc box set on both platforms for the suggested retail prices of $29.98 and $44.98, respectively, The Venture Bros. Season 3 features all 13 uncensored episodes from the show's highly popular third season and bonus material including deleted scenes and commentary. Additionally, the Blu-ray disc box set will be packaged with an exclusive CD which includes 20 tracks that comprise the full musical score from the television series' third season.

So there you go! The site says the release date is March 24, 2009, so there's a while to wait, but Blu-Ray fans and Playstation 3 owners rejoice.

Update: In celebration of this momentous event there's a new poll (or vote in the sidebar).
I've had a PS3 since June 12th, and now I finally know the first blu-ray I am getting.
I guess HD and the soundtrack kind of make up for the $15 extra. But hopeully Amazon will have it cheaper, as they are known to do
Dec. 6, 2008, 8:19am
Yeah, Blu-Ray is a bit too pricey to have as much market saturation as the industry would like, as evidenced by the extra cost here. Hopefully in the future that would change, but yeah, if you're not too keen on spending the extra cash wait for a sale.
Dec. 6, 2008, 8:22pm
I would buy the Blu-Ray but $44.98 is a bit much. Then again you get The Soundtrack with it too so I can see why it is so expensive. I'm still debating which one I'll buy. I'm just glad they have a release date now........................
Dec. 8, 2008, 1:36am
Remember, Amazon will have it for cheaper than that. It's hard to buy a DVD in an actual retail store unless there's a sale because Amazon is cheaper 99% of the time.
Dec. 17, 2008, 8:52am
So glad to hear this. Looks great so far. Will definitely mark March 24 on my calendar.
Dec. 6, 2008, 10:02pm
i'm not about to change my entertainment viewing system around, but bonus soundtrack, bonus soundtrack, bonus soundtrack!!! so unless a change of release plans will make the soundtrack included with the dvd version too, it will have to be the dvd set for my repeated watching pleasure, and the blu-ray which will possibly be worth some collectors item points. Hurry up March 24!
Dec. 6, 2008, 11:57pm
Just seeing that Atari 2600 style box warms my heart to no end. I can't wait for this one!
Dec. 8, 2008, 12:37am
^^^^to that, it's like a product-jones flash-back!! Lusting for an old 2600 game... ;)
Dec. 8, 2008, 8:52pm
Oh mah god!
I've been waiting for dvd news. I never expected it to come from IGN.
So is that the real art? And why hasn't Publick mentioned it yet? Oh well, we'll see; hopefully the release date doesn't turn out to be further back.
I have a PS3, so I want the Bluray. But I also want to watch it in places other than my basement, so I want the DVD.
I think the CD makes the purchase of both formats a necessity. I knew I was gonna want both formats, but I also knew that the purchase of both at the same time would be hard to justify.
I guess $75 isn't tooo bad. I love you, the Venture Brothers.
Dec. 9, 2008, 12:59am
Yeah, looks like I'm going to have to get both versions too. I wonder what this means for the soundtrack that was talked about.
Dec. 9, 2008, 9:29am
What do you mean? This is the first I've heard of a soundtrack, and I think "Additionally, the Blu-ray disc box set will be packaged with an exclusive CD which includes 20 tracks that comprise the full musical score from the television series' third season" pretty much sums it up.
Dec. 10, 2008, 12:42am
I'd imagine we're still getting the soundtrack...that was discussed as a J.G. Thirlwell release, whereas this is obviously Adult Swim/Astrobase Go.

My guess is that this will just cover the season three tunes, and the official J.G. soundtrack will cover 1-2. Fingers crossed, folks...
Dec. 10, 2008, 3:44pm
Thirlwell's site said that the Venture Bros. soundtrack was supposed to come out in March on Williams Street Records (i.e., Adult Swim's record company). It sounds like it's could be the same thing, then. But on the other hand, Thirlwell's site says nothing about it being packaged with Season 3, as an exclusive or otherwise.

I really hope that term "exclusive" is wrong or misleading. I love Venture Bros. and I love JGT's music even more. But I don't have a Blu-ray player and don't plan to get one, so the practical case for me is that I'd be paying $45 for a CD.

If I were going to spend that much money, and that's a gigantic *IF*, it'd be under extreme protest and would use up all the goodwill that Adult Swim has accrued from me.
Dec. 17, 2008, 10:01pm
Informative
We all realize that the release date is a tribute to our favorite dead henchman, right?
Dec. 10, 2008, 3:44pm
Uhhh.... When they say "uncensored", that doesn't include the hot tub scene at Sgt. Hatred's party does it? 'Cause I could pass on that part. Otherwise, F@#% yeah! Bring on those unbleeped cuss words!
Dec. 19, 2008, 10:01pm
Maybe this is a weird thread to bring it up, but on the Season 2 (?) commentary they mentioned that a couple guys made and sent them fan commentaries for all the episodes; I think Jackson talks about how they're way better than the stuff they do.