by Mike
Published: April 3, 2010
Over the years I've run a few of April Fools' Day gags on the site. They generally revolved around a silly idea and included some modifications to the presentation of the site. The first one I did, back in April 2005, was 'The Super Milk Chan Experiment' which was a simple redesign of the site pretending that it had switched over to covering news on the extremely bizarre anime that was airing on Adult Swim at the time. The following year I reused the same joke except as 'The 12 Oz. Mouse Experiment' for a different bizarre show.

These are the actual logos used on the site those fateful days.

2007 saw nothing on April 1st followed by a few weeks of The Monarch usurping and updating the site, followed by the site being taken back by The Guild and finally 'returned' to me. The year after that I restyled the site to look like one of Adult Swim.com's more garish color schemes (floursceant oranges, pinks and yellows) and put up a bogus press release stating that the site had been aquired by them (parodying the Bear Sterns aquisition by Chase Manhattan Bank that had happened recently).

April Fools'! So much hilarity to be had (click for full sized)!

Last year I didn't run a gag mainly because I couldn't think of one that I had time to put together. So this year I wanted to put together something a little more robust to make up for that. This year's (2010) April Fools' gag wasn't really a gag in the traditional web site April 1st kind of way. It was more intended to be it's own sort of mini-ARG, though I did throw a few jokes in there for good measure.

Development of the entire thing took me perhaps around a month. I didn't have a super clear idea what I wanted from it, just that it was going to be a series of ridiculous quizes. The original idea was to make it some kind of Guild of Calamatous Intent recruiting site. That idea basically stuck but I slowly moved away from explicitly stating that it was a Guild operation. It went from being Guild-branded to only revealing itself at the end to containing only very vague hints. In retrospect that change may not have been the best since it removed a familiar context from what was happening. If people don't know that they are supposed to be acting one way they they may be more inclined to be honest.

The site uses a lot of Javascript and AJAX calls in order to function seamlessly and without too much transparency. Having the site transition from one section to another and dynamically populate itself made it seem more interesting to me, though looking back it probably wasn't necessary and only ended up adding a lot of extra work for me.

It also implements a rudimentary mail queue system which I did to make it seem more like applicants were being pre-screened. The queue was cleared by me manually for the entire day. I wrote a quick and dirty script that told me the number of emails in the queue. I checked it several times a day and ran the send script whenever I noticed that there was mail waiting to be sent.

I wasn't entirely sure what would come of this whole thing since I didn't really run it by anyone prior to launching. Obviously the biggest fear was that nobody would participate and if people did participate then nobody would complete it. The first thing ended up not being true, but the second one sadly did come true.

There were a total of 72 sign ups from the initial form, however only 62 of those were legimate email addresses and 53 were unique emails (with a few people entering two or three times). So 53 people isn't too shabby for a fairly ominous looking form put up on April Fools' Day.

However, here comes the sad stats. Whenever you use the sign up form an account is created for you, with the username and password (both randomly generated) emailed to you later on. Of the 72 accounts created, 33 of them never got beyond the initial registration, meaning they never logged in an accepted the terms of service.

So what of the remaining 39 people? One single person failed on the final test ('Manifesto') and another failed on the second to last test ('Situational Reactions'). The bulk of the failures occurred in tests one and two. A total of 19 people failed during the first test and 14 more failed out of the second test. There are four remaining accounts that have not been disabled but potentially didn't actually do anything either. One person rejected the terms of use for some reason.


Chart denoting the status of all accounts.

It should also be noted that there is a status that signifies an account has completed all tests, however I did not include that status on this graph because nobody actually has it. D'oh.

The Specifics of the Tests

So what was the trick to the tests? Well, basically it came down to extremes and some basic trickery. The first test was a simple scored self-evaluation. For the maximum score every question had to be answered with either a 1 or a 5. The more villainous you are (or at least answering from a villian's perspective) the higher your score will be.

A score of 30 or higher was required to pass the test with a 100 being the highest possible score (five points per question). My choice of 30 seemed to be just about right since the average score was 27.84.

Here's a breakdown of how people answered coupled with the expected correct answers:


Light green is the highest possible scoring answer (always 1 or 5), dark is the average answer given.

The second exam took questions from various IQ tests. The scoring was done in a pretty straight forward manner, right answers gave you points, wrong answers didn't. However you were also deducted points every ten seconds of test time. Answering them at a normal human speed (a few minutes), even if you got them all correct, would usually lead to a failing grade.

Here's a breakdown purely for each question and how many times it was answered correctly:


Number of times a question was answered correctly

The trick to the test, which I attempted to convey (but failed to, for the most part) was to just hit submit as fast as possible. Initially if your test time was under 15 seconds then you automatically passed, but after it became clear that a lot of people were failing that test I upped that limit to 90 seconds. Of the 18 times the test was taken the fastest time was 16 seconds and the slowest was about 23 minutes with the average clocking in just over 7 minutes. Naturally because of this the average score was -0.8, so clearly this test was the main downfall of the whole thing.

The third exam, 'Situational Reactions' scored you based on how agressive you were. You passed the test if you scored either very high (for crazy psycho agression) or very low (denoting attention to bureocratic rules). If you answer D to every question then you will pass, likewise if you answer B to everything you would get similar results. Mixing in too many of the other answers would put you into neutral territory and you would fail.

The fourth and final test was meant to show that people should be deceitful and take advantage as much as possible. The site 'pretended' to be broken and then presented you with an opportunity to set your test score. The only requirement for passing was if you set your score above 100 (denoting that you were thinking big).

The data for those two tests isn't really relevant since only two people took the third test and one person took the final test.

Eye on the Prize

What perhaps ended up being a happy mistake was the prize for completing the tests. Initially I had planned on giving away something to random people who finished, but eventually that got scaled back because I wanted to save stuff for easier to win giveaways. The end result was the decision to have the 'prize' be the joy of completing something. That and you got a goofily customized certificate (which of course nobody aside from me has seen): 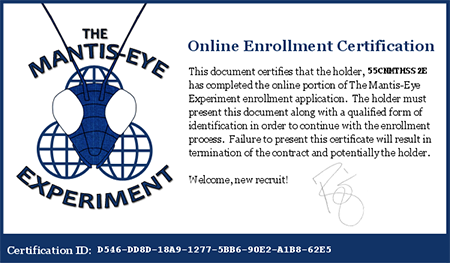 Well, it would have been sweet if someone saw this (click for full size)

The serial number on the bottom is unique for every user and it printed your assigned username up there at the top as well. One of the holdovers from the Guild version of this thing remains, with that signature being David Bowie's. I also spent a decent chunk of time drawing that logo (sorry, I'm not an artist), so I guess whoever reads this article will get to see it at least.

That's essentially it. I think the main issue with the tests was that I didn't give enough hints as to how to pass them. There also generally wasn't enough time to have it run its course since I decided it would only be 'open' for one day. A single day for a fairly small number of participants simply wasn't enough time for people to brainstorm or figure it out. I also could have been less vague with my hints in some cases, and providing some more context for the site as a whole would have helped a lot.