Five Years: And In The End

Oh man, it's over! I kind of didn't know what I was getting into when, nearly a year ago, I randomly realized that this site was five years old. It's closer to six years old now, thanks to my decision to spread the thing out to coincide with the two halves of season four (still technically all within the fifth year of the site). It'll be six on December 8th, to be precise. Six years is a long time, and even more amazing still is the fact that Venture Bros. has been airing regularly for longer (by about three months from season one's start until basic conception of this site), and in production since 2002.

The Five Years celebration is easily the most work I have put into the site as far a concentrated effort goes. I kind of had nothing to start with either. I figured I would give away some stuff and maybe do some kind of interview but that was vaguely all I knew. I ended up with incredible generosity from Jackson, who got me into contact with someone at Adult Swim who hooked me up with a bunch of stuff to give away (and then hooked me up with it a second time when someone at my apartment building stole the package). Jackson also came up with the idea to record he and Doc for their interview, rather than just writing down the answers, which was pretty cool. James Urbaniak also agreed to do a quick interview, so I was doing pretty well, to my surprise.

Really though, Five Years is less of a celebration of this site and more a celebration of The Venture Brothers, since this site obviously wouldn't exist without it. I'm reminded of the first year wrap-up I wrote in 2005. Looking at those numbers I wrote down (which are pageviews, not unique visits) it reminds me how much the show has exploded in popularity in the last couple of years. Back in 2005 barely anyone knew about it. The show narrowly escaped cancellation after season one but thanks to fans like you and strong DVD sales it survived and grew stronger every year, which is very remarkable for a TV show (most serials lose viewers as time goes on). The explosion between season three and four and even between each half of season four has been amazing. During the season this site gets an exponentially higher number of pageviews then back in October 2005, which would indicate to me the show's deservedly expanding popularity.

So I really can't state enough how awesome it is that Jackson, Doc and the whole crew put so much of their time and effort into making this show, and how amazing it must be for them to see such improvements year after year, season after season. They should be proud of that (and I'm sure they are) and also that they were able to do it with a very modest budget, both for production and advertising. The show has spectacular word of mouth, and I believe the buzz it gets on Twitter and Facebook and everything is a huge help. I honestly think that if the show had premiered two years ago instead of back in 2004 (when Twitter didn't even exist and Facebook was only a few months old) it would have never teetered on the edge of its demise after season one. So not only should the people who work on this show be proud, but you, the fans should be as well.

So even though it was a lot of work, I had a good time putting it all together, and I feel that it was a dual celebration of the show and you guys, the fans. I also got to pay you guys back for supporting the site, regardless of if you've been coming here for a few months or a few years. Even if you didn't win any prizes (which is likely given the number of entries compared to how many prizes I mailed) I hope you still enjoyed participating. As an added bonus, records were set for the season 4.2 finale. The most visitors at the site ever on the day after (11/22) and far and away the most comments on a single post for the "Operation P.R.O.M." discussion. So thank you guys for that.

So that's a wrap for all of this. You'll notice that the Mantis-Eye Mug giveaway ended yesterday and the Five Years crest that has adorned the header of the site for almost a year is gone (making it look strangely naked). I'll still continue to do what I've done these past six years of course, whenever Venture Bros. decides to return, and in the meantime I hope you'll continue to join me for all the latest news and information. Thanks a lot everyone! I can only leave you with what is now a classic phrase: 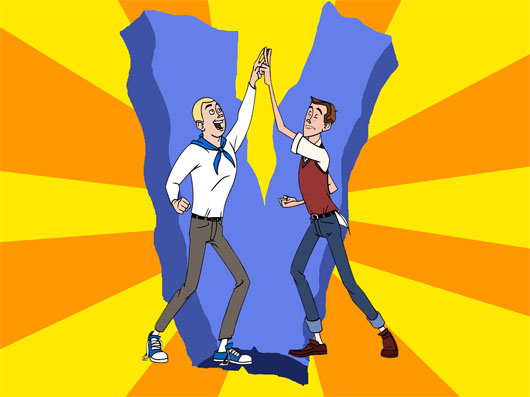 If you missed any of the festivities, you can check them all out in the sidebar to your right (under Misc. Features: Five Years of Mantis-Eye), but here are some of the highlights if you're interested: