Sometime earlier today the art and release date for the Venture Bros. season five DVD/Blu-Ray was released! You can check out the art below (click for a bigger version) and the release date is currently March 4th, 2014 for both formats. All season five episodes will be included, as well as "From The Ladle To The Grave..." and "A Very Venture Halloween" (technically part of season five's arc). You can also pre-order the DVD version on Amazon for a mere $17.49. No specific word on any extras just yet, though there will be the usual episode commentaries from Jackson and Doc. 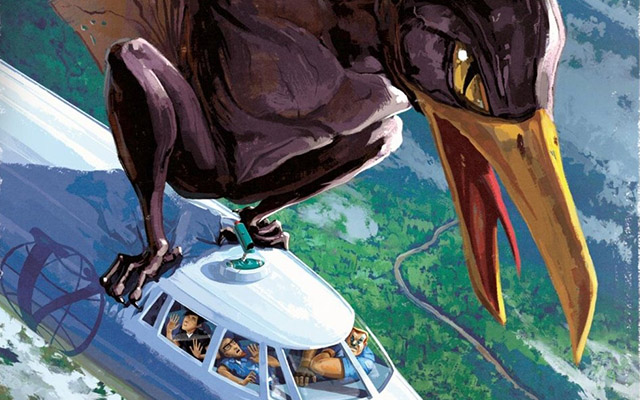 Wait why is Dean in the plane? Wasn't he back at the venture compound during the Pterodactyl attack?
Nov. 21, 2013, 5:50am
because it's overly dramatic pulp magazine cover artwork at its best. doesn't necessarily have to go with the story ... and as long as everyone's on the cover, we're happy :D
Nov. 21, 2013, 7:01am
And don't forget H.e.L.P.e.R. wasn't put back to his old form at that point too but yes the previous person was right we need them all on the cover.
Nov. 21, 2013, 12:10pm
Today's idle speculation since there's nothing else to do... As I recall from that episode the X-1 was pretty much toast after the Pterodactyl attack. But that's hardly the only time the X-1 has crash, is it? Anyone have a count of the number of time Doc has had to rebuild the plane?
Nov. 21, 2013, 12:56pm
Amazing art! I love it!
Nov. 21, 2013, 8:48pm
According to TV Shows On DVD, the only other extras are deleted scenes and, for the Blu-Ray, a digital copy. They don't always have all the info but they're usually pretty reliable. You can check it out here: http://tvshowsondvd.com/news/Venture-Bros-Season-5/19196


Oh, and did anybody look at the cover artwork and think Hardy Boys?
Nov. 22, 2013, 1:46am
Yeah, makes sense since Jackson and Doc don't have much time to produce any other extras (like they did with the season one DVD).

A glorious crowning achievement in man's ability to rise above and beyond!

Jackoson and Doc are the brave Adonis's we not only deserve, but the one's the world needs right now.

Glad I pre-ordered mine when it was soo cheap.