The panel started time was 11:45am but I lined up around 9:45am and there were still a good deal of people in front of me. The convention hall apparently holds 1800 people and all of the seats were filled, which is pretty impressive. Here's the line, though by the time they let us in there was another row of people to the left. 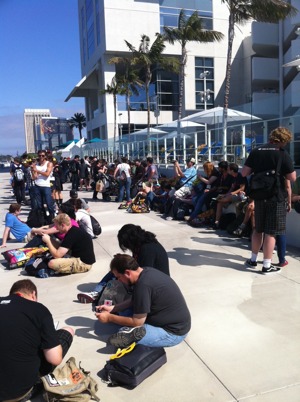 After finally getting seated (followed by another hour of waiting) Keith Crofford came out to let us know about all the Adult Swim panels being held there that day, with The Venture Bros. being the first (and what most people seemed to be there for). Jackson Publick, Doc Hammer and James Urbaniak then all bopped out wearing gear characters in A Different World might wear (or at least that was the claim). Doc had some sort of faux-silk jacket on that he claimed was the hottest thing he had ever worn, plus a hat that said 'Nasty Boy'. Jackson also had a sweet jacket plus 'Dwayne Wayne glasses' (the kind that flip down) and James was given his own hilarious jacket. 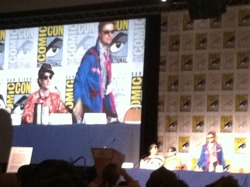 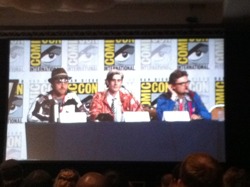 Also sorry that I took pictures of the screen and not actually them, but they were too far away to take decent photos of, though I could see them fine from my seat myself.

Anyway, they thanked everyone for coming and talked a little about how they had been working on the Shallow Gravy special mostly because, at the time, they had an obsession with Hank and Dermott's band. They said that they pretty much only wanted to make a three minute video of "Jacket" (the song sung in "Operation P.R.O.M.") but Adult Swim said they couldn't do anything with a three minute video and instead encouraged them to make something show-length. The entire video (which was hilarious) was screened as well as a quick teaser about the special itself, which appears to be in the style of VH1's "Behind The Music" (only with Hank, Dermott and HELPeR as the band). It will air August 28th and I'm sure everyone will think it's awesome.

After that they fielded questions for the rest of the panel. It's kind of an odd time because season four ended months ago and they are only in the writing stages of season five, so there's less to talk about. Doc especially was unhappy whenever someone asked a specific question about a future plot or character development, saying (numerous times) that "questions about the show will be answered in the show." Nonetheless we got some insights into a few random things, such as how Jackson and Doc had discussed an arch-nemesis for plug face guy the night before ("instead of going to a party") and then Jackson's elation when there was actually a guy in the audience dressed as the plug face guy. Doc noted that plug guy had maybe 15 seconds of total screen time and that the guy had spent more time on the costume than they had spent designing the character. 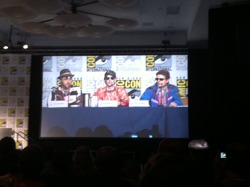 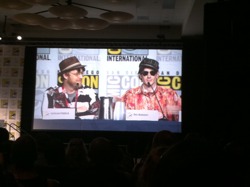 Amazingly there was yet another question about Kim. Jackson and Doc were very adamant in saying that Kim was not coming back and she was in fact down in Florida which is "unescapable" by Doc's account.

Someone also asked what the resolution to 21 and 24 was and they said that they felt they had explained it in the last episode. Essentially 24 is most certainly dead and gone but perhaps if you believe in ghosts then he was actually a ghost.

Another question asked that I have seen asked a few times before was what exactly was Dr. Girlfriend's question at the end of season two, since we never actually hear what she says. The guys say that, while it should be pretty obvious what she said, it was never really meant to be spoken. Essentially it amounts to something like "I don't want to be your second in command, we should be equals in this", hence their application for duoship.

At the end of the panel Jackson gave a free pass to all costumed people for the costume contest to be held that night. There were some pretty impressive and well-made costumes at the panel as well. Along with plug face guy there were a couple of Monarchs with Dr. Mrs. (including one cheerleader), a regular-sized Billy, a skinny Sgt. Hatred, an impressive Phantom Limb with proper light-up arms, a Dr. Henry Killinger complete with Magic Murder Bag, various Hanks and Deans and Dr. Ventures and even a classic Baron Underbheit and a Girl Hitler. 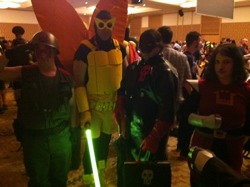 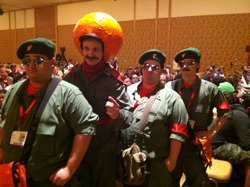 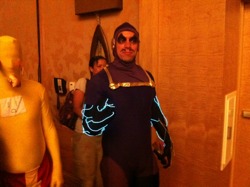 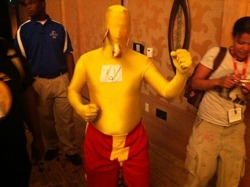